Nairobi Prison was built in 1911 to house 800 prisoners, but by 2003, the inmate population had already exceeded 3,000. Unsurprisingly, in view of such extreme overcrowding, sanitation, hygiene and general living conditions have been severely affected. Officials don’t even have enough uniforms for all the inmates. 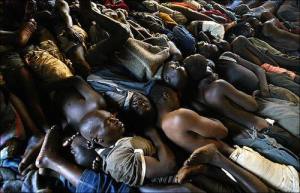 Anders Breivik is serving a 21 year sentence for the murder of 77 people during a shooting spree and bombing in the summer of 2011. This past November, he sent a list containing a dozen demands to the relevant prison authorities, calling his prison conditions “torture” and decrying his current video game options, among other things.

The list, which was acquired by the AFP today, demanded among other things an update to his PlayStation 2, wanting instead a newer PlayStation 3 with a better choice of games. In particular, he wants to choose the games he gets to play, and he wants “access to more adult games”, complaining that he has been given things like Rayman Revolution, “a game aimed at three year olds.”