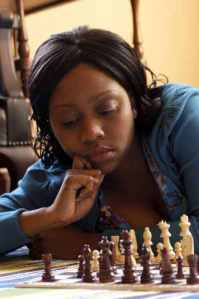 From Clutch Magazine: Rochelle Ballantyne, 17, of Brooklyn is taking the chess world by storm. She is on the verge of becoming the first African-American female chess master and her journey has been documented in the film, Brooklyn Castle. Brooklyn Castle tells the stories of five members of the chess team at I.S. 318 middle school in Brooklyn. The film follows the challenges these kids face in their personal lives as well as on the chessboard, and is as much about the sting of their losses as it is about the anticipation of their victories. Ironically, the biggest obstacle thrust upon them arises not from other competitors but from recessionary budget cuts to all the extracurricular activities at their school.

Ballantyne was recently profiled in Teen Vogue and talked about her rise in the chess world and her motivation. “My grandmother taught me to play when I was in the third grade. I was really active as a child, and she wanted to find a way to keep me relaxed and get my brain going,” Ballantyne told Teen Vogue. “When I first started playing, she introduced to me the idea of being the first African-American female chess master. I didn’t think about it much because for me it seemed like an impossible feat, and I didn’t think it could happen. I wasn’t as focused and dedicated as I am now. I didn’t think I was a good chess player—people told me I was, but it wasn’t my mentality at that moment. But then after she died, that really affected me, because she was the one person that always had confidence in me. She never pushed me, and she always respected me for who I was. I have to reach that goal for her.”

Read the rest of this story on Clutch Magazine.