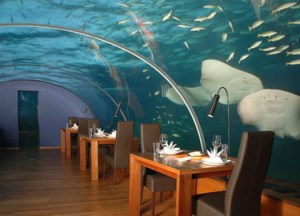 What I really should be saying about this, just to tick off fellow Craver Mike Yamamoto, is that I wish this underwater restaurant were off the coast of Antarctica, so that I could go and see some penguins swim by. Alas, I don’t know how well that could be accommodated with all the, you know, heating that’d have to be installed. But I digress. The Hilton Maldives Resort & Spa has recently opened the Ithaa Undersea restaurant, which is indeed underwater. A blogger at Table of Malcontents seemed rather disgusted at the prospect of dining in an establishment where there were fish swimming around everywhere, but personally I think it’d be pretty cool. The cuisine is described as “Maldivian-Western fusion,” which sounds good to me as long as there’s some tasty calamari on the menu.